I try to lay bare the processes by which mental interiors become another reality. In my work this reality is always very simple, an architectural experience, for instance, could be the curve of a sink, the shadow of a door, a book on a table or simply the flat surface of a tabletop. Before anything else, the relation between people and their environment is a sensory fact and an arranged space can also include another human being. A warm back can evoke memories of closed, intimate spaces, a wardrobe perhaps. The arranged space around one’s body becomes an architectural environment.

Notions of space and the way I want to get the public to experience this space are fundamental to my work. This experimental approach is related to my concern with the question of how a place or thing can change – through movements, through emotions, through other things, or is it only my own perspective that changes?

The situations we thus create are situated between the daily and the dreamlike, appealing constantly to the imagination, to the possibility of contingency and curiosity.

In my drawings I deliberately ignore spatial reality and the physical resistance of objects. I use a lot of black, both ink and felt-tip, because black is actually nothing: absence rather than contour, neither foreground nor background; it is closest to being a hole. Some solutions seem architectural, the space in which the people are located is reflected in their bodies and vice versa. Objects and interiors can impose themselves on human bodies to create new forms: hybrids of humans and their surroundings.

Since 2010 I work together with Chris Baaten on performances, sculptures and films. 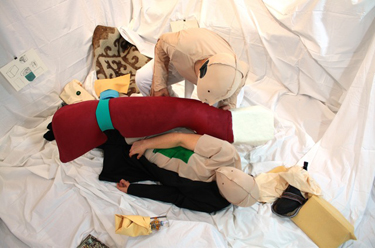